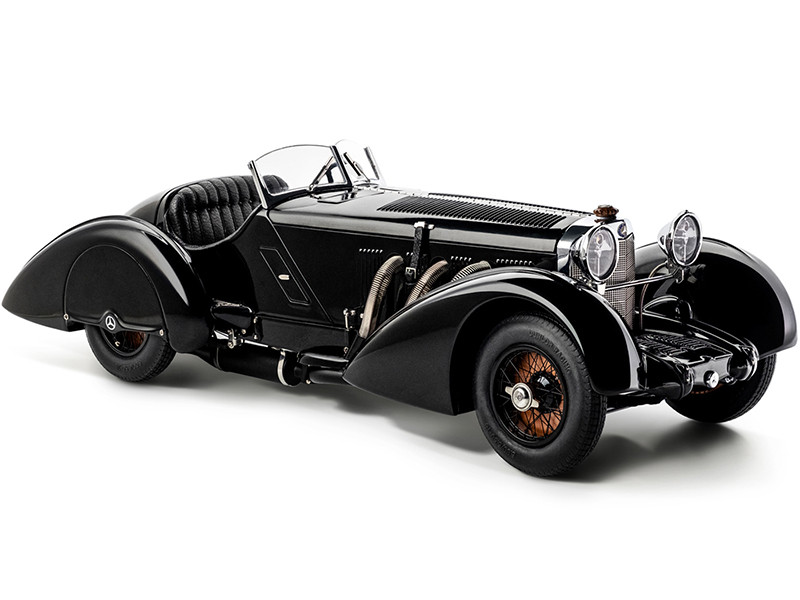 In addition to being a one-off vehicle with a renowned past, the Trossi Roadster has a very special meaning for CMC. It goes back to the onset of the CMC company in 1995, when Shuxiao Jia and Herbert Nickerl, the two company co-founders, introduced the first CMC-made model car by replicating none other than the Trossi Roadster in 1:24 scale. Immediately after its release, the CMC miniature was voted “Model of the Year” by a professional magazine. While the vehicle is considered to be one of the most valuable Mercedes-Benz classics in the world, the CMC replica was held to do a fascinating justice to the car.

Count Carlo Felice Trossi came from the Gaglianico noble family in Biella of northern Italy and was born in 1908. As a motor sportsman and racing driver, he was elected Vice President of Scuderia Ferrari 1931. Gifted at the driving wheel, he finished second in the 1932 Mille Miglia.

SSK Chassis 36038 was initially delivered to Japan devoid of a body in 1930, and from there – still without a body – it was shipped to Rome, where it got a buyer and a coach body. Next to signor Antonio Maino, Count Trossi became the second owner of the car in June 1933. He commissioned Willi White, an English coach builder with the implementation of a new body design that he had sketched on a piece of paper. It was an extremely aerodynamic design and surprisingly in accord with the contemporary trend.

The spectacular and unique configuration of the car, together with its rich, glistening black finish, gives the vehicle a virtually magical appeal. Prior to the start of commission work, however, Trossi was said to have sold the car to someone but bought it back before long. The Black Prince stayed with Trossi since then until his death in 1949.

The Argentine Alfredo Polledo bought the car afterwards, took it to South America, and sold it two years later to Charly Stich, an American in whose Manhattan workshop the car was extensively overhauled for two years. During the rest of the 1950s the car changed hands again. It went to Carter Schaub, an entrepreneur in the oil business, who described the new acquisition as his “biggest car with the smallest trunk”.

After further sales that started initially in 1962, the car wound up in southern France and later in England, where Charles Howard and Anthony Bamford restored it from the ground up. In 1983 the vehicle crossed the Atlantic once more to join the collection by Tom Perkin, an entrepreneur from Silicon Valley.

In the same year, the Black Prince went on a tour of the east coast of the USA, only to become a part of the extensive and exclusive collection by Ralph Lauren, the successful fashion mogul in the end. Paul Russel of Essex, MA restored the car again at the request of the new owner, who is known to be a perfectionist. It seems natural that the Black Prince won the award “Best of Show” at the 1993 Concours d’Elegance in Pebble Beach.