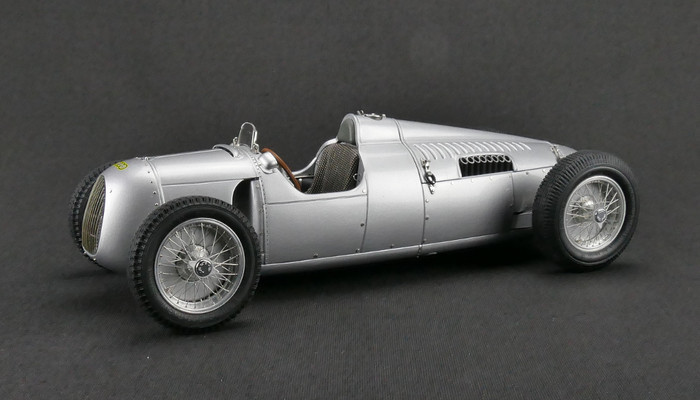 Comes in a brand new box.

Developed by Ferdinand Porsche, this race car made history in a way that virtually no other race car had done before.  With the Type C in 1936, Auto Union introduced a monoposto that was almost totally different from all other race cars up to that time. The most striking feature was the unconventional design of the sensational 16-cylinder V-type engine installed behind the driver and ahead of the rear axle – an innovation which soon became an accepted practice.  Perhaps the greatest reason for the success of the 520 hp “bullet” was its highly talented race driver: Bernd Rosemeyer. In 1936, which was his most successful year, he became the European Champion and won numerous Grand Prix races.  In 1937, this new ace of Auto Union kept his main competitor, Mercedes-Benz, in check, and was able to continue his successful career with five more wins.

At the beginning of 1938, however, his career came to an abrupt and tragic end due to a fatal accident that occurred while he was trying to break the world speed record.  After the end of the Second World War, the remaining race cars in Zwickau were turned over to the Soviet Union as reparation payment.  It is still unknown what exactly happened to the race cars.

The Auto Union Type C is hand –assembled from 1026 parts into an extraordinary precision model.  The individual parts are made of high-quality materials: 23 parts are zinc die-cast, 754 are metal or copper, and 153 are made of plastic.  The remaining 96 parts are screws, rivets, or simulated screw heads.  For the first time, CMC is presenting a model in 1:18 scale that is composed of more than 1,000 parts – a milestone in its history.