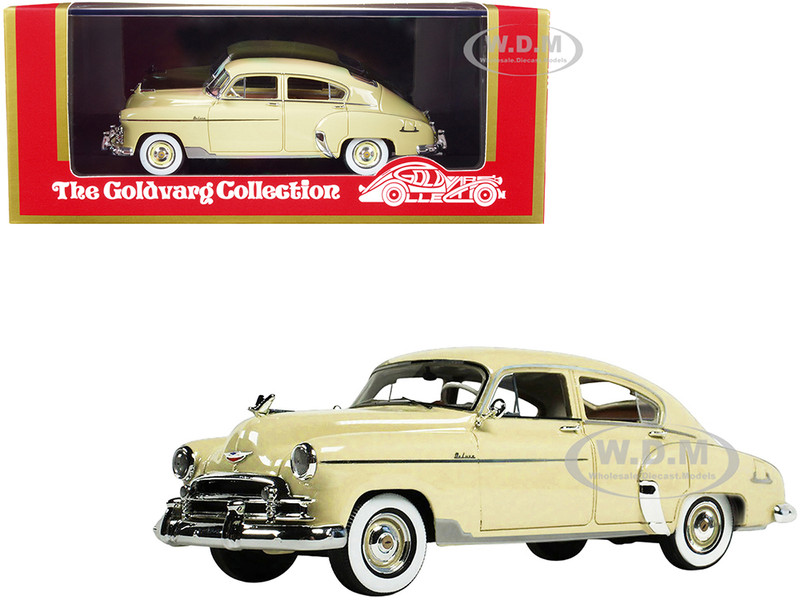 The Chevrolet Deluxe is a trim line of Chevrolet automobiles that was marketed from 1941 to 1952, and was the volume sales leader for the market during the 1940s. The line included at first a 4-door sedan, but grew to include a fastback 2-door "aerosedan" and other body styles. The 1941 Chevrolet was the first generation that didn't share a common appearance with Chevrolet trucks, while the Chevrolet AK Series truck did share common internal components. It was with this generation that all GM vehicles experienced increased width dimensions to accommodate three passengers on the front bench seat and an additional three passengers on rear bench seat installed vehicles. This was accomplished with the deletion of running board thereby adding additional room inside the passenger compartment.

The original series ran from 1941 to 1948, after which a new body style was introduced for 1949, running through 1952. During the post-war years and continuing through the early 1950s, the Deluxe range was Chevrolet's sales leader, offering a balance of style and luxury appointments unavailable in the base Special series; and a wider range of body styles, including a convertible, Sport Coupe hardtop (starting in 1950), two- and four-door sedans and four-door station wagons. The exterior sported smooth curves with chrome and stainless trim. The rear bumper had an optional center bumper guard that had to be ratcheted out of the way so the trunk cover could be lifted. Front and rear bumpers had optional chrome "tips", a dress-up item that bolted to the ends of the stock bumper. Although it wasn't a Chevrolet option, a popular after market feature was a large external sunshade that protected the driver from glare off the metal dashboard.The interior had cloth bench seats and a metal dash, sometimes with a simulated burl wood grain. The radio was a simple mono vacuum tube type radio with integrated speaker. On the left side of the radio was the throttle knob, marked "T". On the right side of the radio was the choke knob. A manual-wind, 7-day clock was built into the glove compartment door.In 1949, the first year of the car's all-new postwar design, the grille incorporated five "teeth" and had round parking lights in the center of the grille, on each side. In 1950, the grille was the same as the previous year but lost the five teeth. In 1951, the grille changed, with the parking lights moved to the bottom corners, and in 1952, the last year of this style, the teeth returned and the parking lights were made larger. In 1941, the Master Deluxe Series AG and Special Deluxe Series AH had updated styling from the year before with things such as a new grill, new suspension, new curves, and the headlight mounted in the fenders, and the Special Deluxe introduced the Special Deluxe Fleetline sedan. The Special had better fabric than the Master, along with arm rests in the doors. There was full instrumentation. 1942 models saw the most noticeable improvement with the ability to accommodate six passengers in sedan body styles, which was shared with all GM products during this model year. The Master Deluxe was the economy model, and could be identified by not having a "Master Deluxe" nameplate attached to engine cover while the "Special Deluxe" did. The Signal-Seeking radio became an option along with a shortwave radio feature. On February 1, 1942, civilian automobile production halted for war production. For the 1946 model year the names were changed to Stylemaster and Fleetmaster.  In 1949, all the Chevrolets got the first new styling after the war. The Deluxe was the brand new upper-end model for Chevrolet. The cheapest Deluxe was the Deluxe Styleline 6-passenger sedan, costing $1,492. Brakes were 11-inch drums. It had full instrumentation. The front suspension had stabilizers. 1951 Chevrolet Deluxe coupe (rear) 1951 Chevrolet Deluxe station wagonMany things changed starting in 1950, starting with a luxuriously-appointed hardtop coupe, called the Bel Air. The new Bel Air including upgraded cord and leather-grain vinyl trim (available in a choice of several two-tone schemes), full carpeting and other appointments not available in even the Deluxe series, and a wide range of two-tone paint schemes. The 1950-1952 Bel Airs—during these early years, the Bel Air was officially part of the Deluxe range—shared only their front sheetmetal ahead of the A-pillar with the rest of the range. The windshield, doors, glass, and trunk were common with the Styleline convertible, but the roof, rear quarters and rear windows were unique.The other change was the availability of Powerglide, a two-speed automatic transmission, exclusively in the Deluxe and Bel Air models. It was powered by a 235-cubic inch six-cylinder engine developing 105 horsepower and had a 3.55:1 rear differential; the engine went on to become the "Blue Flame six." Models sold with the standard three-speed manual transmission got the usual 216.5-cubic inch engine, developing 92 horsepower.