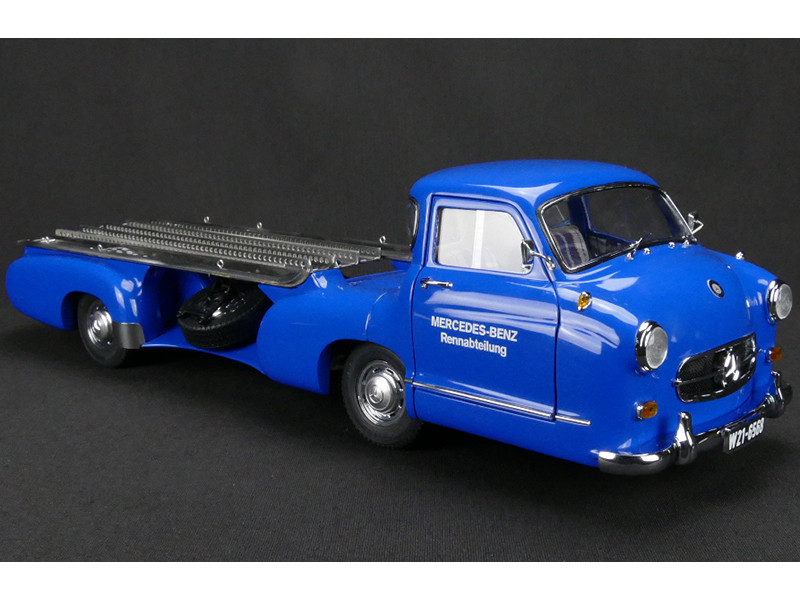 For years, the "Blue Wonder" was one of our best sellers. That was no surprise if you consider its aesthetic configuration and multiple functional parts. Choice materials and perfect workmanship, together with a deep blue high-gloss finish, made this replica a collector’s item that belonged in a special class. Years have elapsed since this model was sold out, and it is time to put an end to such a dearth. But instead of producing a remake of the old M-036, we are introducing a new version that incorporates newly discovered exterior details and accessories from the archives. For example, the chromed wheel covers, an embellishment of Mercedes star inlaid in the front, and auxiliary head lamps with orange-colored lens. Furthermore, there are additional stone-chipping guards on the rear fenders, a rear plate illuminating system with two reflectors, and an oval national symbol "D" on the rear bumper.
This new edition will be ready for delivery during 2015. After all, your W196 Monoposto, 300 SLR Mille Miglia and the Uhlenhaut Coupé need to have their transporter back!
The Blue Wonder: In 1954, Mercedes-Benz created in its experimental department a hand-crafted, one-of-a-kind model --  the Mercedes-Benz racing car transporter. With a deep blue finish, soft curves of the body, and a top speed of 170 km/hr , the "Blue Wonder" attracted as much attention as the racing cars that it transported. After Mercedes-Benz retired from professional racing at the end of 1955, the transporter disappeared from the public eye and was regrettably scrapped in 1967. In the early 90s, Daimler-Benz remembered the importance of this vehicle to its racing heritage. Under the direction of the Mercedes-Benz Classic Center, an official replica was resurrected.