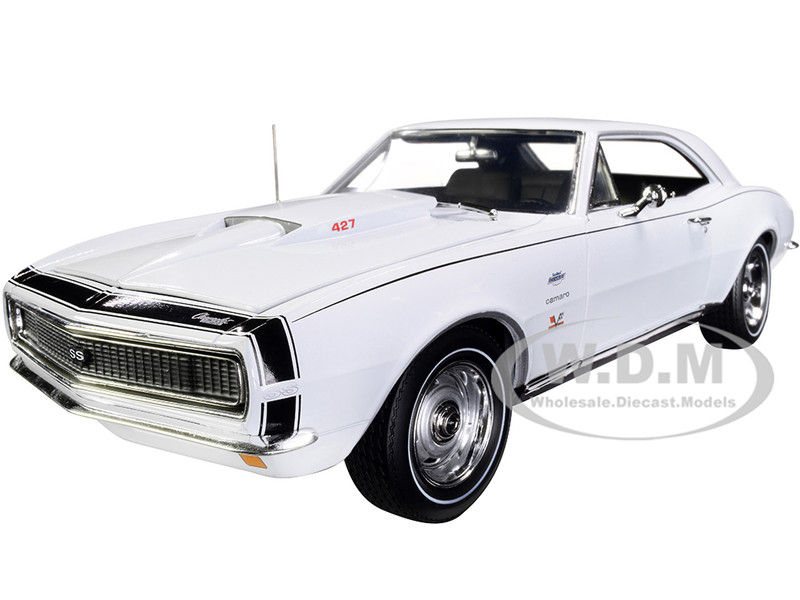 If you wanted the best high-performance Chevrolet money could buy in the late 1960s, you went to Yenko Chevrolet at 575 West Pike Street in Canonsburg, Pennsylvania. Yenko Chevrolet was a dealership from 1949 to 1982 that gained a reputation for custom-built high-performance muscle cars. Beginning with the Corvair, they progressed into the Nova, Camaro, Chevelle, and Vega muscle car market. By 1969, with the help of GM’s COPO (Central Office Production Order) system, the cars Yenko ordered had the desired L-72 427ci engines factory-installed. Today, Yenko-built vehicles are some of the most sought-after and highly-desirable muscle cars ever made.
This Auto World die-cast is an exact 1:18 replica of a fully-documented 1967 Yenko Chevy Camaro. This car was a part of the historic Muscle Car and Corvette Nationals Yenko display back in 2012 at the Donald E. Stephens Convention Center in Rosemont, Illinois. This highly-detailed 1:18 die-cast replica is painted in factory-matched Ermine White with black striping. Newly-tooled components include the RS front end with hidden headlights, rear valance, and lower rocker trim. Other details include the Chevy rallye wheels with white stripe, black interior, and of course, the highly-detailed 427ci motor under the hood.