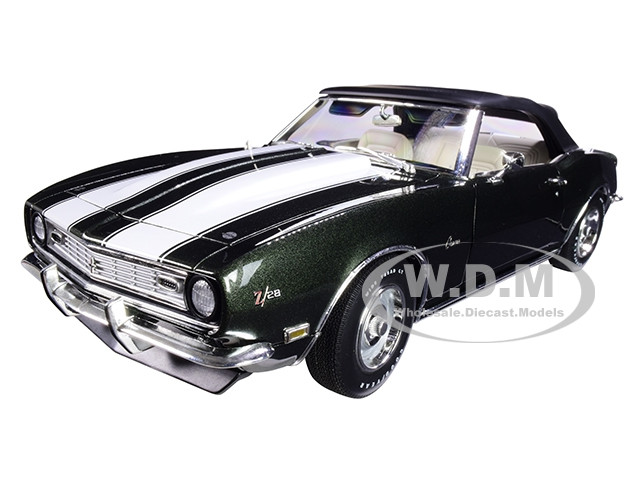 This Camaro convertible was ordered through the Fleet Special Order Department and assembled at GM’s Norwood, Ohio, plant on July 15, 1968. It was the only 68 Z/28 convertible built. The car was loaded with extras. It did not originally carry the performance options. They were added when the car was taken from the Executive Garage and sent to the GM Tech Center. Then it was taken back to the Executive Garage and made available for Estes to use. The car was finished in dark Fathom Green and had a folding rear seat, auxiliary console-mounted instrumentation, auxiliary lighting, power windows, a remote outside rear-view mirror, custom seat belts, a blue light AM/FM stereo system, a rear window defroster, a Comfort tilt steering wheel and positraction. Race parts included 4-wheel disc brakes, a performance suspension package with Koni shocks, a cowl plenum fiberglass hood (a prototype of the ‘69 Camaro fiberglass hood), a cross-ram intake and tube headers. ACME is proud to announce this tribute to the infamous one of one convertible ever made.