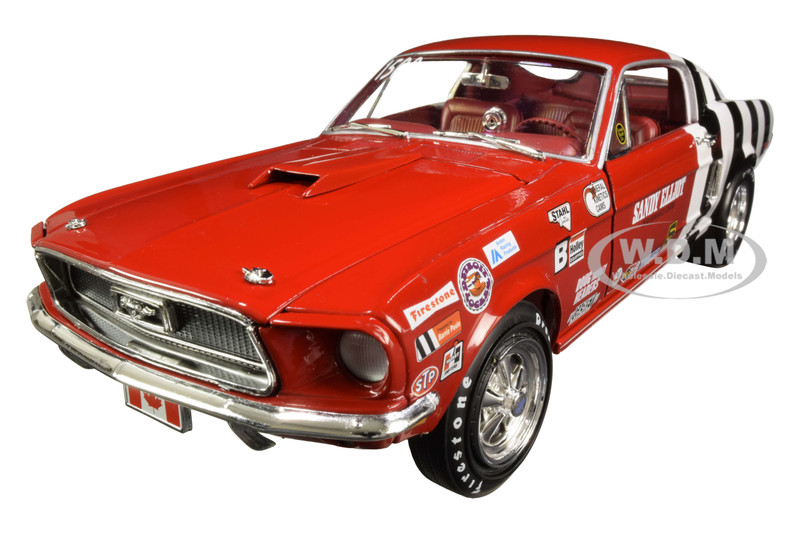 The Sandy Elliot Ford Drag Racing Team was a powerful force in the NHRA Super Stock Eliminator class in both Canada and the US during the 1960s and 1970s. Elliot’s son John was the first Canadian to win an NHRA stock class. In 1970, driver Barrie Poole also made history by becoming the first Canadian with a National Eliminator title. For 3 years, the two Sandy Elliot Fords stacked up their victories and achievements across North America. By 1971, they had raced in 17 NHRA Nationals winning three times. In addition, they were runner-up twice, made the semi-finals 12 times, and set nine national records! In 1971, Sandy Elliot was awarded Super Stock Crew Chief of the Year.
Painted in bright red with black and white stripes, Auto World has replicated this 1968 Ford Mustang Super Stock just as it appeared on the track at the 1970 Springnationals. John Elliot drove this SS/F 428 CJ Mustang for the class win running 11.15s at 109.62mph. Victorious, he advanced to go head-to-head with Bob Lambeck in Dick Landy’s SS/EA Dodge Charger. He blazed through the finish line recording an 11.29s pass at 110.97mph, clinching the 1970 Super Stock Eliminator title.