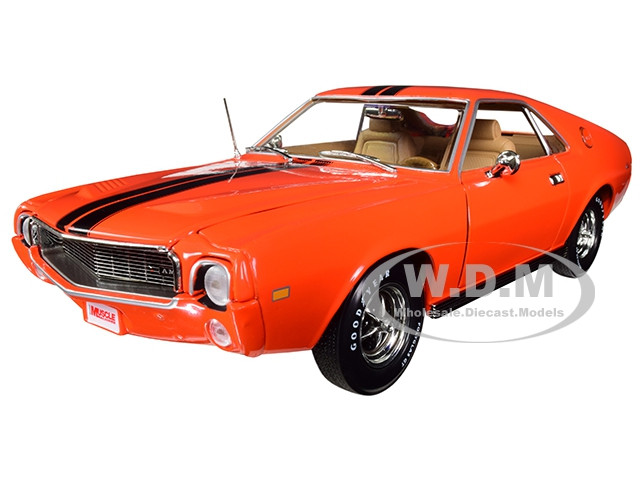 Mel Valentine bought this car brand new. Around the same time, Mel married his wife Barb. So, both his wedding and the acquisition of his new Big Bad Orange 1969 AMC AMX shared anniversary dates. The May 2006 issue of "Hemmings Muscle Machines" chronicles the fascinating adventure of love and life of Barb and Mel with some humorous anecdotes of this car’s history. Over the course of decades, the car was kept in a garage and only driven in fair weather. If the sun was shining, Mel took it for a cruise, or even an occasional drag race. Mel even let Barb drag race the car once... and she won! Furthermore, the article extensively discusses the history of the AMC "Big Bad" colors, and how the $34 factory-option came to be. Auto World is excited to continue the story of Mel and Barb Valentine’s 1969 AMC AMX as a 1/18 scale die-cast replica. The Big Bad Orange paint is factory-matched with the dual black stripes. Under the hood is and accurately replicated 390 cubic-inch V8.