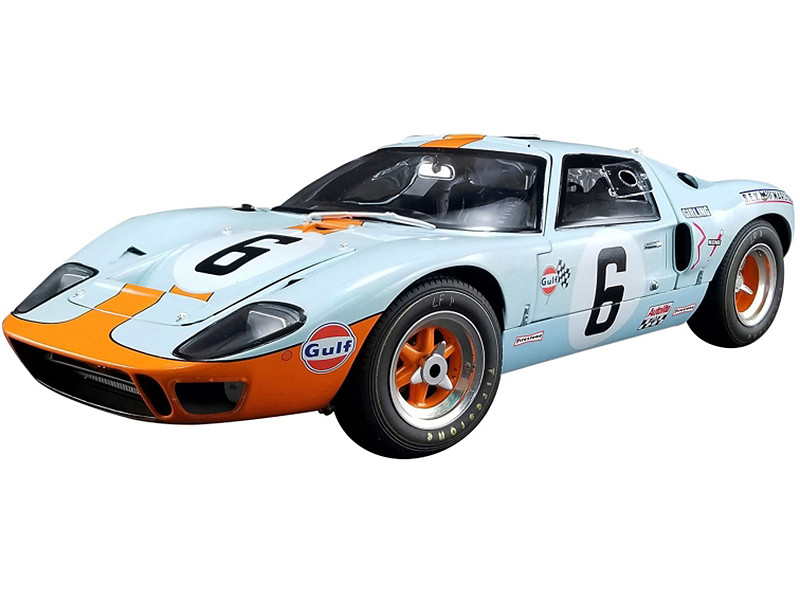 Shelby came back to Le Mans in 1969 with Jacky Ickx and Jackie Oliver with the Gulf liveried #6 GT40. The GT40 traded the lead with a Porsche 908 constantly during the last 2½ hours. On the last lap, the Mark I crossed the finish line a mere 70 yards ahead of the Porsche! With that second win, car 1075 earned its place in history and cemented the GT40's reputation. A recount of the famous race was printed in a press release... "The victorious GT40 was almost out of gas and the driver of the Porsche, Hans Herrmann, thought his brakes were fading. For the final two hours the pair ground around the high speed 8.369 mile French road circuit, often at over 200 mph, laying plans for the final lap. The new Porsche 908 and the aging Ford GT40, "1075" were locked in a game of high speed, high stakes Le Mans-chess. The Porsche was faster on the long Mulsanne straight, but the Ford was quicker from the Mulsanne hairpin back to the starting line. The pair arrived at the finish line just 15 seconds before 2:00 PM, the race's appointed finishing hour. Both would have to make another agonizing yet fast and perfect lap. As the other cars were flagged off the track at 2:00 PM only the battling lead duo remained on the course adding to the drama and tension of that last long lap. A matter of just 70 yards separated the winning GT40 and the second place Porsche after 24 hours."