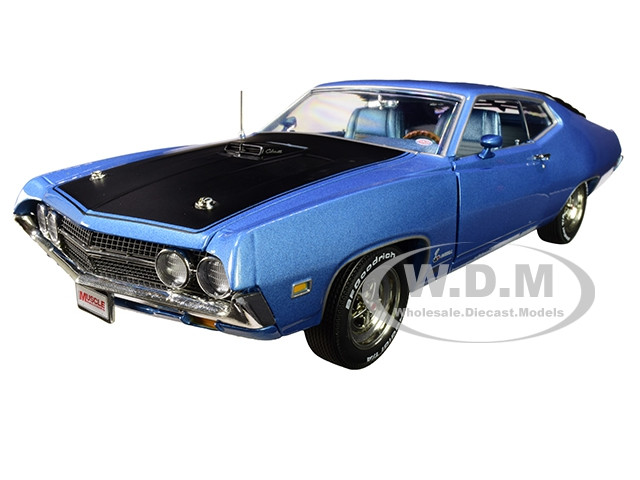 Ed Nowakowski is no stranger to fast Fords both on and off the track. He raced Mustangs in the SS/I class back in the 1970s. With his hands-on experience with Blue Oval power, he gained an early appreciation for the Cobra Jet-powered Ford Torino and the performance it offered, especially examples with the Drag Pack option installed. Compared to the price of Mustangs of the era, the Torino was a downright bargain. The Super Cobra Jet Drag Pack version was the quickest of them all. Over the years, Ed has owned six 1970 Torino Cobras. This one, he purchased about 16 years ago and actively drives, races, and shows at several events each year. Ed raced this car at the Pure Stock Muscle Car Drag Race a few years back with a time of 13.30s at 107 mph.
Auto World has accurately replicated this car just as it was featured in the Hemmings Muscle Machines September 2018 issue. Painted in rarely-seen Medium Blue Metallic, its scarcity is emphasized by the matching blue interior. This car also features the "racing black" hood, Super Cobra Jet Drag Pack, rear window "Sport Slats" and Magnum wheels.