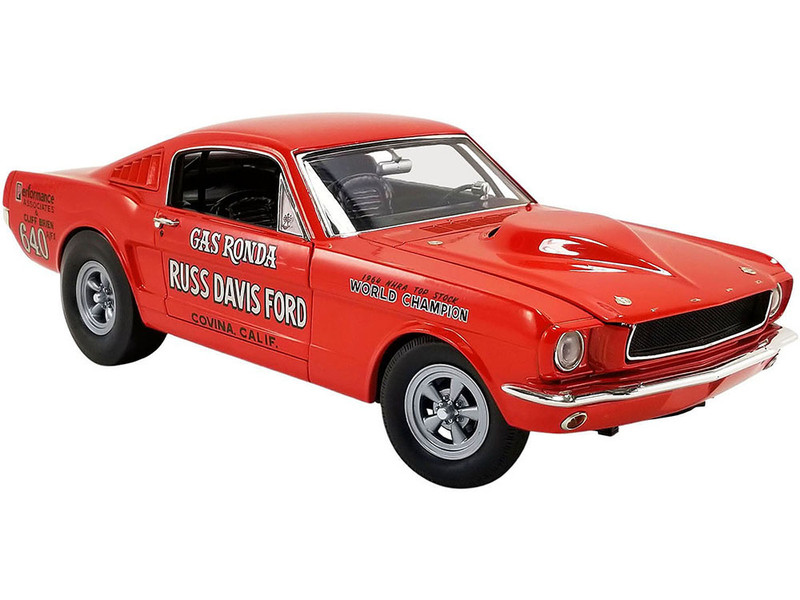 As most people are aware, the 1964 1/2 Mustang took the automotive world by storm, but it was cars like Gas Ronda’s 1965 FX special that put this model into the racing-history books. Significant rules revisions for 1965 meant that Ford refocused on A/Factory Experimental and unleashed the new 427 CI SOHC engine at the same time. These cars were built using steel factory fastback bodies at the Holman-Moody NASCAR shop in Charlotte, North Carolina, and reportedly cost more than $11,000 each, though the racer’s cost was just $1. This car being one of only 11 built is itself important. Only five of those came with the exotic SOHC engine when delivered, and being driven by Gas Ronda himself sets it into its own league. In a pre-season testing accident, a broken axle resulted in a complete write-off for his first car, and Ronda was given the car that had been built as Ford’s touring show car. The final A/FX Mustang constructed, this car is the highest serial number at 5F09_380240, and it is the one that Ronda raced nationwide throughout the 1965 season. It featured the tube-fed dual Holley 4-barrel SOHC layout beneath a teardrop scoop, the heavily-reworked engine bay required for engine fitment, signature lightweight and fabricated Holman-Moody components, factory-engineered weight-transfer/traction-bar system and a 4-speed manual transmission. During the season, this car held the A/FX record at 10.88 and would win Mr. Top Stock honors at the AHRA World Championship. Located in highly complete condition by Mike Guffey, this car more recently was given a comprehensive restoration by Eric Lindberg of Elk River, Minnesota, with detailing and fitment befitting Ronda’s personal style. The trademark Poppy Red paint and period-correct lettering help complete it, while documentation includes copies of the original Ford $1 contract and purchase order. This car has been featured in the books 'Extreme Muscle Cars" by Bill Holder and Phil Kunz, "Super 60s Ford" by John Smith, "Ford Total Performance" by Martin Schorr, "Super Stock, Drag Racing Family Sedan" by Larry Davis, "Ford Drag Team" and "Total Performers—Ford Drag Racing in the 1960s" both by Charles Morris. The popularity of the first-generation Mustang fastback has never faded, but very rarely has one of the real 1965 Holman-Moody versions ever been offered for public sale. Gas Ronda’s car may truly be a once-in-a-lifetime opportunity if you have ever desired to be part of that history.