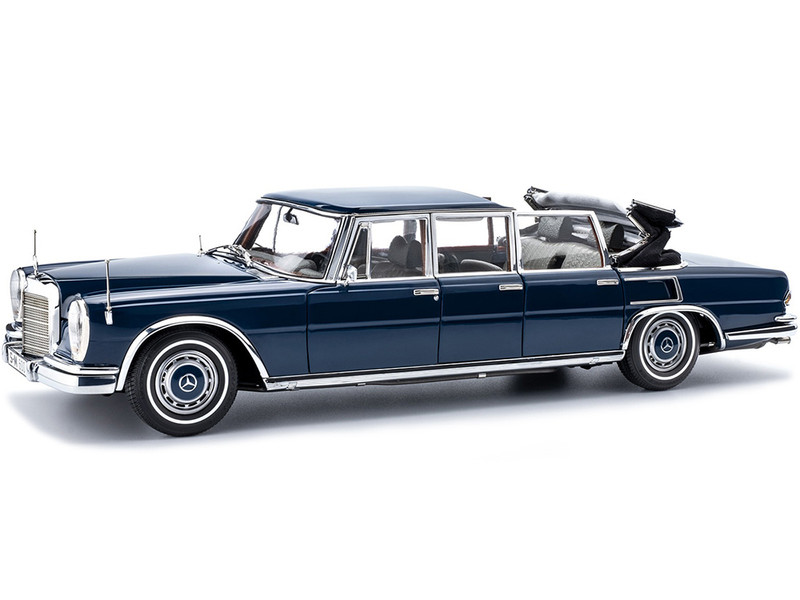 The Mercedes-Benz 600, also known as the W100, was a state-as-art vehicle crafted by the Daimler-Benz during the 1960s and 1970s. This stylish vehicle was used worldwide for and by the upper echelons. It served as an epitome of perfection, high-end technology, comfort, exclusivity and uniqueness. The Pullman was and is still the largest passenger car in the post-war era. In addition to state-sponsored use, international celebrities in politics, business, aristocracy and show business also chose to own and ride in a Mercedes-Benz 600 proudly. The “Big Mercedes” debuted at the Internationale Automobil-Ausstellung (IAA) in Frankfurt in September 1963. Several editions were offered, including Pullman Limousine, Pullman Sedan and Pullman Landaulet.
The four-door sedan is almost two meters wide and 5.54 meters long, whereas the six-door Pullman Saloon has the stately length of 6.24 meters. The third version is an open-top Pullman Landaulet. It features a fixed roof over the driver/chauffeur in the front and a convertible folding roof in the back of the passenger compartment. Two Landaulet versions were available, one with a long rear hood and the other with a short one. In the rear of the classic Pullman, two rows of seats were arranged. In the long six-door version, a middle row of folding seats was an option. It was intended for customers traveling with staff or bodyguards. The vehicles were powered by a V8 injection engine with a displacement of 6.3 liters and an output of 250 hp. Thus, the 2.6-ton limousine was capable of a top speed of up to 205 km/h. In its prime time, the 600 Pullman was the fastest production sedan in the world.
The comfort of the vehicles was enhanced by air suspension, a comprehensive hydraulic servo system, an electrically adjustable heating and ventilation system, air conditioning, hydraulically adjustable seats, hydraulic windows and sunroofs. As for the interior decorations, the customer could choose between different precious-wood finishes and the finest velour or leather for interior coverage. There was also a bar in the rear with a fridge, car phone and retractable partition.
With this luxury car, Daimler-Benz created a resounding buzz among the international elite, and for decades, the 600 Pullman was a benchmark that stood in a class of its own.
We would like to share with you some of its functional highlights and our joy over the achievement of transcending ourselves and technical difficulties to make these functions possible. In the drive to develop a soft-top for the CMC Mercedes-Benz 600 Landaulet, it was not only required that the fabric canopy could open and retract, but also that the rear window would follow suit without impeding the folding function. In addition, the edges of a fully-spread soft-top should be aligned with the tops of the closed doors, and no apparent crevice was detectable. These were the goals that we set out to achieve.
In the wake of the debate, two different approaches were taken into consideration. One was for symbolic replication of a soft-top without functions — a safe but undesirable approach. Another was to take on the challenge by meeting the seemingly insurmountable difficulties in the face and coming up with an innovative process that enabled the canopy to become functional.
To begin with, a metal bracket was developed to provide the convertible framework for the canopy. The rear widow, however, posed a serious problem that interfered with the folding of canopy consistently.  We spent a lot of time tackling this difficulty and tried many different solutions until it was finally surmounted!
Last but not the least, it was important that the bracket gave the right support and shape to the soft-top so that it was in line with the overall configuration of the car. To this end, we had to repeatedly modify the bracket design.