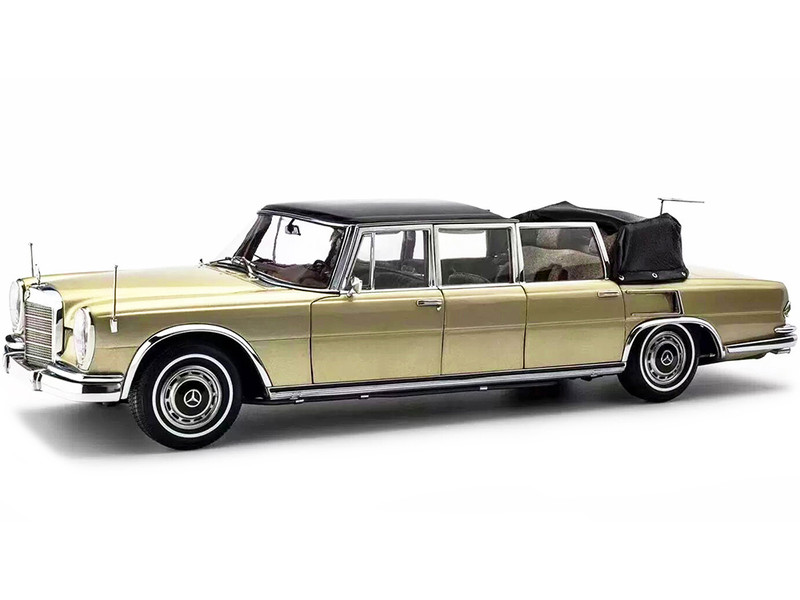 Landaulet style vehicles were usually ordered in muted colors to match the official nature of their intended functions. But not in the case of this model, which combines an unusual metallic beige with dark red-brow. It must have become one of the most photographed Mercedes-Benz 600s in the world. The original vehicle was temporarily owned by racing driver Didier Pironi. As was common in the US, the 600 limousines was equipped with a TV set, recognizable by the large antenna on the rear lid.
The Mercedes-Benz 600, also known as the W100, was a state-as-art vehicle crafted by the Daimler-Benz during the 1960’s and 1970's. This stylish vehicle was used worldwide for and by the upper echelons. It served as an epitome of perfection, high-end technology, comfort, exclusivity and uniqueness. The Pullman was and is still the largest passenger car in the post-war era.
In addition to state-sponsored use, international celebrities in politics, business, aristocracy and show business also chose to own and ride in a Mercedes-Benz 600 proudly. The "Big Mercedes" debuted at the Internationale Automobil-Ausstellung (IAA) in Frankfurt in September 1963. Several editions were offered, including Pullman Limousine, Pullman Sedan and Pullman Landaulet.
The four-door sedan is almost two meters wide and 5.54 meters long, whereas the six-door Pullman Saloon has the stately length of 6.24 meters. The third version is an open-top Pullman Landaulet. It features a fixed roof over the driver/chauffeur in the front and a convertible folding roof in the back of the passenger compartment. Two Landaulet versions were available, one with a long rear hood and the other with a short one.
In the rear of the classic Pullman, two rows of seats were arranged. In the long six-door version, a middle row of folding seats was an option. It was intended for customers traveling with staff or bodyguards.